A Colombian judge known for posting racy images of herself on social media was suspended for three months this week when she appeared half-naked and smoking in bed during a virtual court hearing. 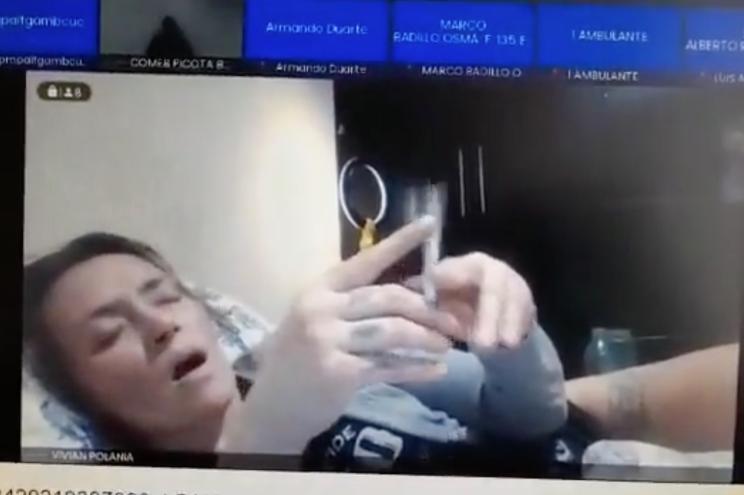 During a Nov. 16 court hearing held via Zoom, Judge Vivian Polonia was seen in lying in bed in her underwear.

Polania, 34, made national headlines last week when she appeared on a Zoom call lounging in what looked to be her underwear and puffing on a cigarette during a court hearing related to a car bombing targeting an army brigade that took place in the city of Cúcuta in June 2021.

The video of the scantily-clad judge quickly went viral and prompted the disciplinary committee to launch an investigation into Polonia’s NSFW display.

According to the panel’s 16-page ruling, Polonia kept her camera off for nearly an hour before turning it on, revealing that she was lying in bed in a “deplorable” state, looking “disheveled with sleepy eyes,” and slurring her speech.

When an attorney present at the hearing told the judge that her camera had been turned on, Polonia quickly switched the device off.

The committee stated that the decision to place Polonia on unpaid leave through February was made after it was determined that she was not fit to perform her duties because she did not respect the parties at the hearing and failed to comply with the judicial dress code.

“Such a situation is not consistent with the care, respect and circumspection with which a judge of the republic must administer justice, denoting a clear lack of respect from the official,” the ruling read.

Polonia broke her silence in the wake of the scandal sparked by the video, denying that she was half-naked and claiming that she had to lie down during the hearing because she suffered an anxiety attack and had low blood pressure.

Speaking to Blu Radio, Polonia said that was extremely overworked, resulting in her mental health struggles. She also claimed that she has long been bullied by her fellow judges in Cúcuta and threatened with disciplinary actions because of the way she dresses.

Polonia was previously investigated for sharing risqué snaps of herself in BDSM-style outfits and skimpy lingerie displaying her 37 tattoos on her Instagram page, where she had more than 30,000 followers until he account was deactivated this week.

In an interview with the Colombian outlet Semana, the judge said when she first arrived in Cúcuta, she could not bear to wear pants because of the searing heat, so she opted to wear shorts and T-shirts, but she said it made some people around her uncomfortable.

At the same time she discovered CrossFit, and practicing the intense fitness regiment changed the shape of her body, so Polonia switched to wearing “long, elegant” dresses to work at the Palace of Justice.

But Polonia said her new sartorial choices were likewise criticized for being too sexy, and she was urged to cover up with a judicial robe.

“I got tired of pleasing people over my peace of mind,” the defiant jurist said.

Unbowed by the controversy over the Zoom video, Polonia said she will not change her personality for others.