Those are some striking images!

Vera Mekuli, a Bronx rookie cop who made headlines last year when she gave a lap dance to a superior at a holiday party, is heating up Instagram with hot snaps dressed as DC comics bad girl Harley Quinn.

Mekuli, 27, posed next to her black Subaru WRX STI while wearing harlequin makeup, fishnet stockings, and carrying an oversized mallet, just like the anti-hero. 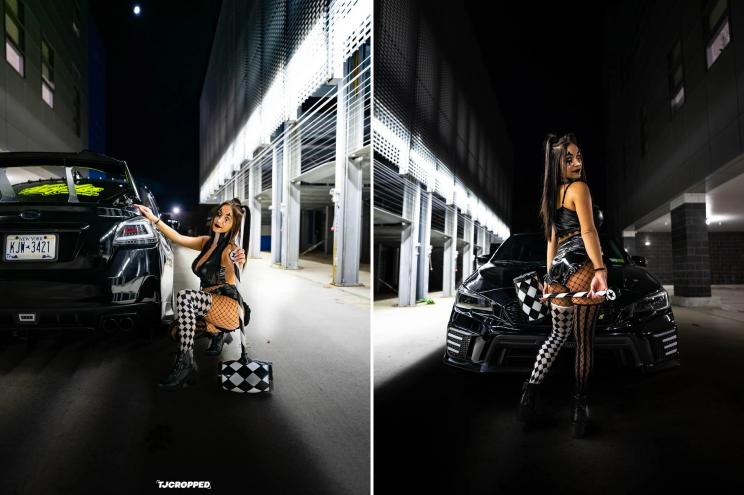 In one image, she stands in front of the car looking back at the camera and in another she is squatting down at the rear of the Subaru, which is outfitted with a spoiler.

Mekuli posted three photos to her Instagram page with the caption “Trouble never looked so fine.”

The saucy snaps made her fans overheat.

“Best cop ever,” another wrote.

But not everyone was impressed with her provocative pix.

“How this broad is still a cop is beyond me,” one wrote. Another chimed in that “People like her are turning the job into a joke. … This is acceptable from a cop? This is back-up if someone is fighting for their life?”

It’s unclear if the cop wants to spark a modeling career, or start an OnlyFans account as some fans encouraged her to do last spring after she posted another provocative photo.

Her Instagram page has her Venmo and Cashapp information if any of her 23,000 followers wants to lend support and send her money.

“She just hired me for a photo shoot. That was all,” photographer TJ Connors told The Post. He would not provide further information on the shoot.

Mekuli got into hot water a year ago at the 44th Precinct’s annual holiday bash when she started grinding on top of married Lt. Nick McGarry, a lap dance caught on video. McGarry was shipped to the transit bureau as the NYPD opened a probe.

She later apologized and said she did not know McGarry was married.

Mekuli was suspended without pay in May after making a stink at a New Jersey state police barracks about a family member’s drunk-driving arrest.