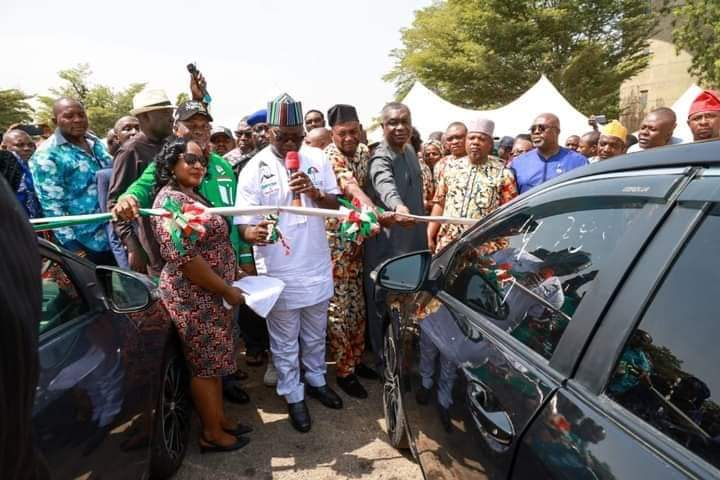 Benue State Governor, Samuel Ortom has presented official vehicles to the 23 Deputy Chairmen of Local Government Councils in the state.

Similarly, the Governor also presented start-up kits to 43 youths of the state trained in automobile maintenance at the Innoson Kiara Academy, Nnewi.

This, the Governor said it is part of efforts towards economic empowerment for youths of the state.

Governor Ortom, who performed the ceremony Tuesday, January 24th, 2023 at the Benue Peoples House, Makurdi, also presented 8 buses to various labour unions and organizations in the state to facilitate their operations.

Governor Ortom, who described Deputy Chairmen of Local Government Councils as critical to local government administration, charged them to maintain the official vehicles presented to them, stressing that despite paucity of funds, the vehicles were provided to facilitate the discharge of their duties.

Other vehicles were presented to labour unions, the palace of the Tor Tiv and Och’Idoma as well as other socio-political groups. 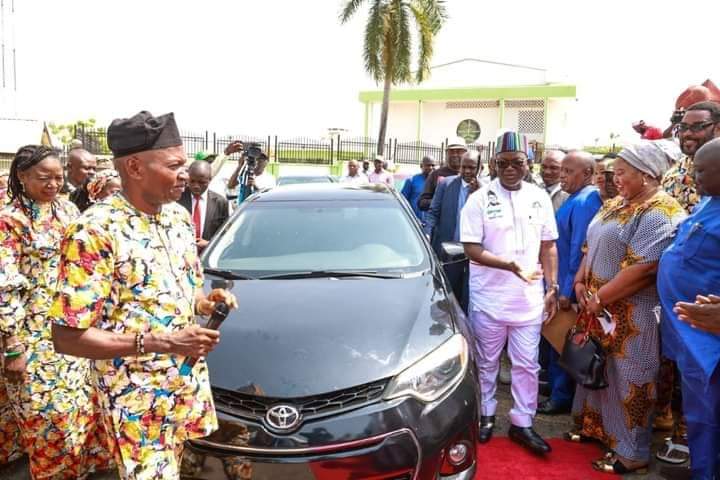 The Governor said the vehicles were meant to enhance the operations of the various unions as well as support the effective transportation needs of the two palaces of the paramount rulers of the Tiv and Idoma nations.

The Governor in his speech also charged the graduands from the Innoson Kiara Academy Nnewi, Anambra State to make good use of the knowledge they have acquired from the training.

He pointed out that due to saturation of the labour market and gross inadequacy of white collar jobs, it was important for young people to embrace skills for economic reliance.

“When you start-up and begin to make money, remember to invest again so that you can compete favourably in the industry. Do your best and I look forward to your succeeding in this endeavor that you have undertaken” stressing that the multiplier effect could trickle down as they will be positioned to train more youths. 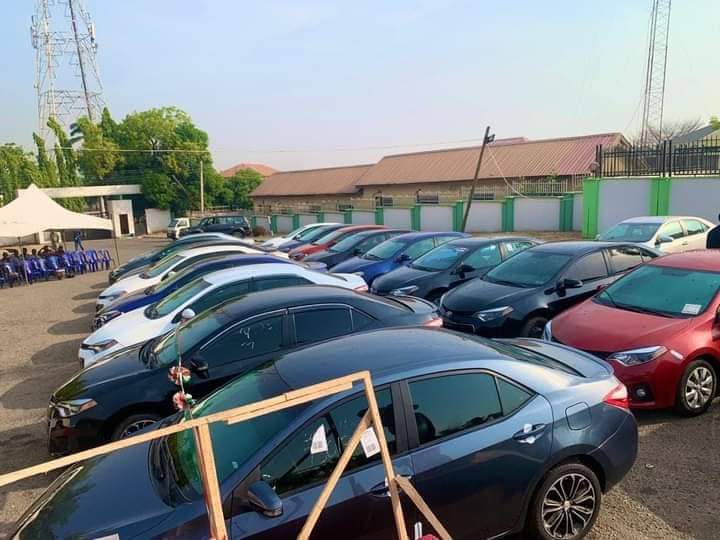 He enjoined the beneficiaries not to despise their little beginnings, stating that “people adding value in various sectors of the economy started small but they were able to nurture and groom it and worked hard and today, they are a reference point. You too can be one of those reference points tomorrow if you commit yourself and work hard and you are dedicated.”

Earlier, Special Adviser, Bureau of Local Government and Chieftaincy Affairs, Barr. Kenneth Achabo explained that a total of N40,730,940 only was expended on the training of youths covering the tuition programme and procurement of modern start-up kits.

He stated that of 50 youths were selected across the 23 LGAs which 7 voluntarily withdrew from the training while 43 received 6 months intensive training in different spheres of auto-oriented disciplines such as: auto mechanics, auto-electrical and electronics, auto-fabrication and welding, and auto-spray painting.

According to him, trainees obtained three different certificates: Certificates in Industrial Training and area of specialty both issued by Innoson Kiara Academy and NABTEB certificate issued by Technical Board.

Achabo also disclosed that complete sets of modern start-up kits worth N14,720,000 from the different auto-oriented disciplines were purchased for the 43 graduands as an empowerment and source of livelihood.

He also thanked the Governor for approving funds for the purchase of official vehicles for the 23 Deputy Chairmen of Local Government Councils in the state.

The Deputy Chairman of Makurdi Local Government Council, Hon. Frank Mbashinya in a remark on behalf of his colleagues, expressed appreciation to Governor Ortom for providing them with official vehicles, pledging to use them judiciously to add value to governance.