Months after presidential candidate Robert F. Kennedy was assassinated in 1968, his family stood on the lawn of their McLean, Virginia, compound to announce the establishment of a foundation to honour the former attorney general’s commitment to “work towards a more just and peaceful world.”

But those lofty goals have lately been called into question with the controversial decision by Kennedy’s daughter, Kerry Kennedy, to award one of the foundation’s annual Ripple of Hope Awards to Meghan Markle and Prince Harry at a Dec. 6 gala. According to the foundation, the couple is receiving the distinction for exposing “structural racism” within the British royal family after they famously left for North America in 2019 and participated in an explosive tell-all interview with Oprah Winfrey last year. 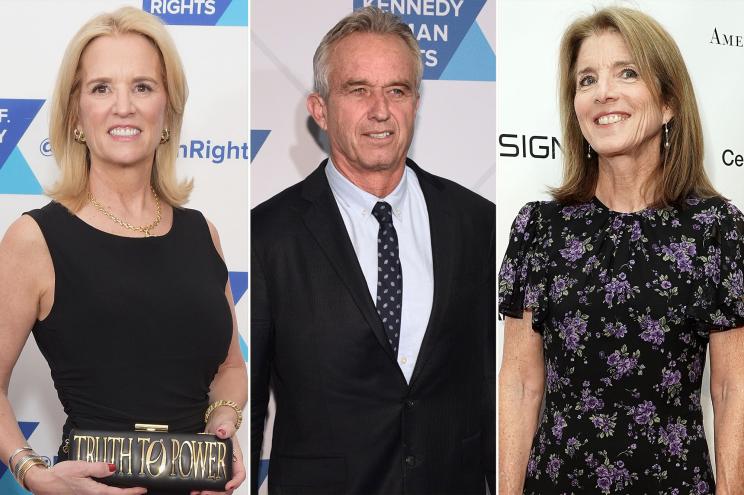 Caroline Kennedy, Robert F. Kennedy Jr., and Kerry Kennedy have traded on their famous names rather than living up to the promises put forth by their legendary fathers, experts say. Getty Images (3)

“Shame on you,” said one observer on Kerry Kennedy’s Instagram page this week. “Linking these people to your father’s wonderful achievements and this award … You have belittled this award for … others who deserved it.”

Another critic wrote: “You’ve turned the award and the organization into a farce and laughing stock awarding Prince Harry and Meghan Markle. Your father will be turning in his grave with this misuse of his name.”

Kennedy family biographer Laurence Leamer agrees and told The Post that the children of Robert Kennedy and his brother, former president John F. Kennedy, who was assassinated in 1963, have a hard time living up to their father’s legacies.

“It’s a curse to be an inheritor, whether you are the Kennedys or Joe Smith,” said Leamer, author of “The Kennedy Women: Saga of An American Family” and “The Kennedy Men: 1901-1963,” among other books. “As an inheritor, the blood thins out.”

During his tenure as Attorney General in his brother’s administration, Robert F. Kennedy ran a successful campaign against organized crime and worked to champion civil rights and end segregation. He was a close advisor to the president and a key strategist during the Cuban Missile Crisis which nearly brought the world to the brink of nuclear war in Oct. 1962.

In the case of Kerry, a lawyer and the seventh child of Robert and Ethel Kennedy, “she wants to be a big player and assume publicity” by handing out an award to Harry and Meghan, Leamer said. “But she never gets it right.”

President of the foundation named for her father since 2011, Kerry is the only Kennedy family member to take a salary from the group, according to federal tax filings. Her uncle Ted Kennedy, who died in 2009, was a longtime member of the charity, and her mother, now 94 years old, continues to occupy a volunteer position on the board. Kerry’s compensation jumped from just over $250,000 in 2011 to more than $540,000 in 2019, the last year for which public IRS filings are available for the group. Much of that increase was due to bonuses she received from the board. In 2018, she received a $225,000 bonus which increased her take-home pay to $555,388, according to public filings. The following year, 2019, her compensation was $500,468, which included a bonus of $150,000, records show.

“RFKHR staff positions, inclusive of our President, are salaried and Board and Leadership Council positions are unpaid volunteer roles,” said a spokesperson for RFKHR in an email Wednesday. The group did not address The Post’s question about the criticism it has received over the decision to grant an award to Markle and Prince Harry. In addition to the Sussexes, RFKHR is also presenting Ripple of Hope awards to Ukraine president Volodymyr Zelensky, among others.

Kerry, who has three daughters with her ex-husband, former New York governor Andrew Cuomo, was arrested in 2012 for drugged driving under the influence of Ambien, a sleeping pill, in Westchester County. She was acquitted two years later at a trial where her attorney invoked the family’s famous lineage in her defense.

“She is a daughter of Ethel and Robert Kennedy and a niece of our past president, John Fitzgerald Kennedy,” said lawyer Gerald Lefcourt to jurors in the packed White Plains courtroom, where two of Kerry’s brothers Robert F. Kennedy Jr. and Douglas Kennedy sat, along with their elderly mother, who appeared in a wheelchair.

Like his younger sister, Robert Jr., 68, headed up a crusading non-profit. In his case, the environmental lawyer was president of the Waterkeeper Alliance for 20 years until he stepped down in 2020. Last year, he crusaded against vaccines and published his bestselling book, “The Real Anthony Fauci: Bill Gates, Big Pharma and the Global War on Democracy and Public Health.”

“This is a terrible thing to say, but Bobby Jr’s father would be ashamed of his son,” said Leamer. “It’s appalling that he is using the Kennedy name to prevent vaccinations.”

In 2013, The Post revealed that Robert Kennedy Jr. kept a “sex diary” in which he chronicled his affairs with numerous women while married to second wife, Mary Richardson Kennedy, who died of suicide in 2012.

His older brother, Joseph Kennedy II, 70, also sought out the role of crusader but garnered criticisms for forging a controversial relationship with Venezuelan strongman Hugo Chavez in order to provide cheap heating oil for Citizens Energy Corp., the non-profit he founded in 1979.

The Boston-based group also raised eyebrows for the salaries it paid Joseph Kennedy and his wife, Elizabeth, who was head of marketing for the group. The non-profit — which bought crude oil from Venezuela at a special price and sold it off at market rates, using the proceeds to bring heating oil to Massachusetts and other states — showed $5.7 million in payments to Joseph in 2019; for Elizabeth Kennedy, the figure was more than $2 million that year, according to tax filings reviewed by The Post. Much of that compensation was set aside for retirement payouts, according to public records.

When Chavez died in 2013, Joseph, a former Congressman, defended the dictator, saying he cared about the poor when “some of the wealthiest people on our planet have more money than they can ever reasonably expect to spend.” Citizens Energy Corp had long said that when they approached oil companies around the world for oil donations, Venezuela’s national oil producer was the only one who was willing to participate in the charitable venture. Under Chavez, Venezuelans reeled from hyperinflation, food shortages, and political repression.

“Joe started this company from nothing and over the years we have helped millions of people,” a spokesman for Citizens Energy Corp. told The Post, adding that the non-profit has aided residents in 26 states by providing more than a billion dollars in cheap heating oil, gas subsidies and prescription drug discounts. The group is now focusing on renewable energy, the spokesman said.

He also said while Joseph was on good terms with Chavez, he has been critical of his successor, Nicolas Maduro, accusing him of “stealing democracy” from the people of Venezuela by refusing to step down after Juan Guiado won the poll in 2018.

Meanwhile, 65-year-old Caroline Kennedy — the daughter of JFK and Jackie Kennedy —has also sought to grab the political limelight. Now the ambassador to Australia, Caroline stepped into the political ring when she announced her bid for Hillary Rodham Clinton’s New York Senate seat in December 2008 after Clinton had been named Secretary of State. But Caroline quit the race two months later.

“When she found out what Democratic politics actually means, she bowed out,” said Leamer. “She didn’t want to have to answer questions or reveal her taxes. She behaved like a princess.”

Caroline went on to support Barack Obama’s campaigns for president, comparing the former president to her father in a New York Times opinion article in 2008.

“I have never had a president who inspired me the way people tell me that my father inspired them,” she wrote. “But for the first time, I believe I have found the man who could be that president, not just for me, but for a new generation of Americans.”

Caroline was named to Obama’s Vice-Presidential Search Committee and was one of the 35 national chairs of his 2012 re-election committee. A year later, Obama chose her to become ambassador to Japan, a position she occupied until 2017.

For Leamer, the inability of the children of Robert and John F. Kennedy to live up to the accomplishments of their parents is fraying the Kennedy mystique.

“I don’t want to denigrate the great things they [John and Robert] have done, but it’s not like people go into voting booths anymore to back a Kennedy.”