Make a viral video of this big-ticket purchase!

Susquehanna International Group, LLP, a secretive high-speed trading firm with offices outside Philadelphia, owns roughly 15% of TikTok owner ByteDance Ltd., founded by Zhang Yiming and valued at $15 billion, making it the largest outside investor in the Beijing-based social media company, according to reports. 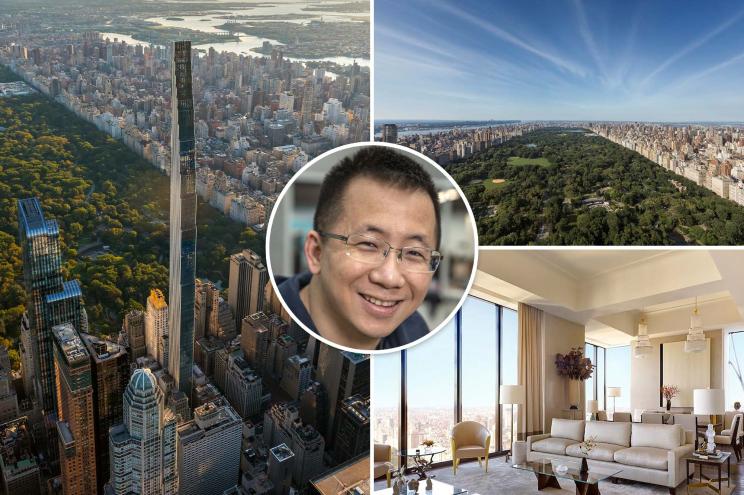 An investor in billionaire Zhang Yiming’s (pictured in the middle) TikTok has paid a pretty penny for two units at 111 W. 57th St. on Billionaires’ Row. Bloomberg via Getty Images / 111 West 57th Street

At 111 W. 57th St., Gong bought a full-floor unit, No. 52, which measures 4,182 square feet, for $25.63 million. It comes with three bedrooms, 3½ bathrooms and floor-to-ceiling windows with panoramic views from Central Park to the wider city skyline.

The 84-story tower comes with 60 units and also includes Steinway Hall, which is the landmarked Steinway & Sons former showroom, complete with a restored limestone facade, that was built in 1925. That’s where Gong paid $8.11 million for unit 16S, which is 2,779 square feet and comes with two bedrooms and 3½ baths — along with a wraparound terrace.

Both condos — in the tower and in Steinway Hall — were sponsor units. “Gong,” a source told Gimme, “spends little time here, as he is mainly in Asia.” The homes are part of his global real estate portfolio, which includes residences outside Philadelphia and in Montana. Gong is also known for co-hosting an exclusive party with Bona Film during the Shanghai Film Festival, where he handpicks the wine, the Wall Street Journal once noted.

The supertall was designed by SHoP Architects — and developed by JDS Development Group, Property Markets Group and Spruce Capital Partners. Gong was repped by Chris Fry, a top broker with Elegran Real Estate that recently announced a partnership with Forbes Global Properties.

The purchase is just another example of how Billionaires’ Row continues to attract offshore investors, Fry told Gimme Shelter.