On Wednesday, President Biden incorrectly stated that Ukraine was the aggressor in its conflict with Russia while announcing the donation of 31 M1 Abrams tanks to the beleaguered Eastern European country.

The egregious error was made by the 80-year-old commander-in-chief during a nine-minute speech at the White House shortly after his administration confirmed the tank donation in coordination with contributions from other NATO countries.

Biden said the US was sending the aid “to help counter Ukraine’s brutal aggression,” before quickly adding, “that’s happening because of Russia.”

“The secretary of state and the secretary of — of the, of, of the military behind me are — they’ve been deeply, deeply involved in this, this whole effort,” he said. 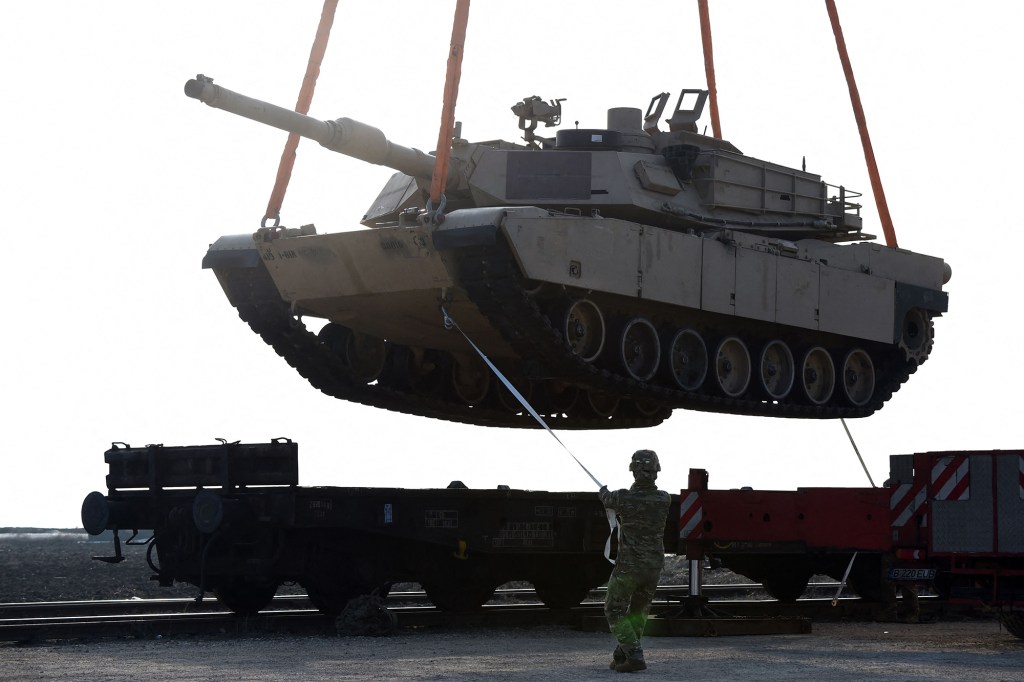 Ukraine has been asking its Western supporters for battle tanks in preparation for a Russian offensive expected this spring.AFP via Getty Images

The US donation — coming on the 45th birthday of Ukrainian President Volodymyr Zelensky — follows Germany’s move to transfer Leopard 2 tanks to Ukraine ahead of an anticipated Russian offensive after 11 months of war.

At one point in his remarks, Biden also called the post-Soviet state “the Ukraine,” an anachronistic term that was more commonly used before the country gained independence from Moscow in 1991.

“Secretary Austin has recommended this step because it will enhance the Ukraine’s capacity to defend its territory and achieve strategic objectives,” the president said.

In response to a reporter’s question, Biden denied that his hand was forced by Berlin’s decision, saying, “Germany didn’t force me to change your [sic] mind. We wanted to make sure we were all together.”

The announcement is an abrupt pivot that comes six days after Pentagon spokesperson Sabrina Singh said “it just doesn’t make sense to provide [M1s] to the Ukrainians at this moment” because the tanks have a gas-turbine engine that runs on jet fuel.

Biden has stumbled before when referencing Austin in public remarks. In March 2021, he seemed to forget the first African American Pentagon chief’s name, saying, “I want to thank the sec — the, the, ah former general. I keep calling him general, but my, my — the guy who runs that outfit over there.”

Biden is the oldest-ever US president and his mental acuity is frequently a matter of public debate, though his defenders say he’s simply prone to gaffes.

Reporters were briefed on the tank contribution on a Wednesday morning background call plagued by bizarre sound issues. The most important parts of the announcement seemingly were muted for unknown reasons.

The Biden administration official leading the call twice attempted to announce the US contribution of tanks but after saying the number “31” their audio cut out, forcing another official to specify 31 Abrams tanks on a third try.

It’s unclear why the call, which also seemed to mute the official’s attempts to share other specific details, had audio issues. The White House uses a third-party teleconference contractor for press announcements.

Congress in December approved $44 billion in aid for Ukraine’s defense against Russia after approving a $40 billion tranche in May. Although most members of Congress have supported the allocations, there’s increasing resistance in both parties.

Biden announced the US donation of a Patriot missile defense battery to Ukraine in December when Zelensky visited Washington to thank the US government for aid and to request even more.

“Just like the brave American soldiers which held their lines and fought back Hitler’s forces during the Christmas of 1944, brave Ukrainian soldiers are doing the same to Putin’s forces this Christmas,” Zelensky said in a rousing Dec. 21 speech to House and Senate members, in which he predicted that “next year will be a turning point. I know it — the point when Ukrainian courage and American resolve must guarantee the future of our common freedom.”